Before porting an existing Corona project, please ensure that it uses features supported by CoronaCards for Windows Phone 8. 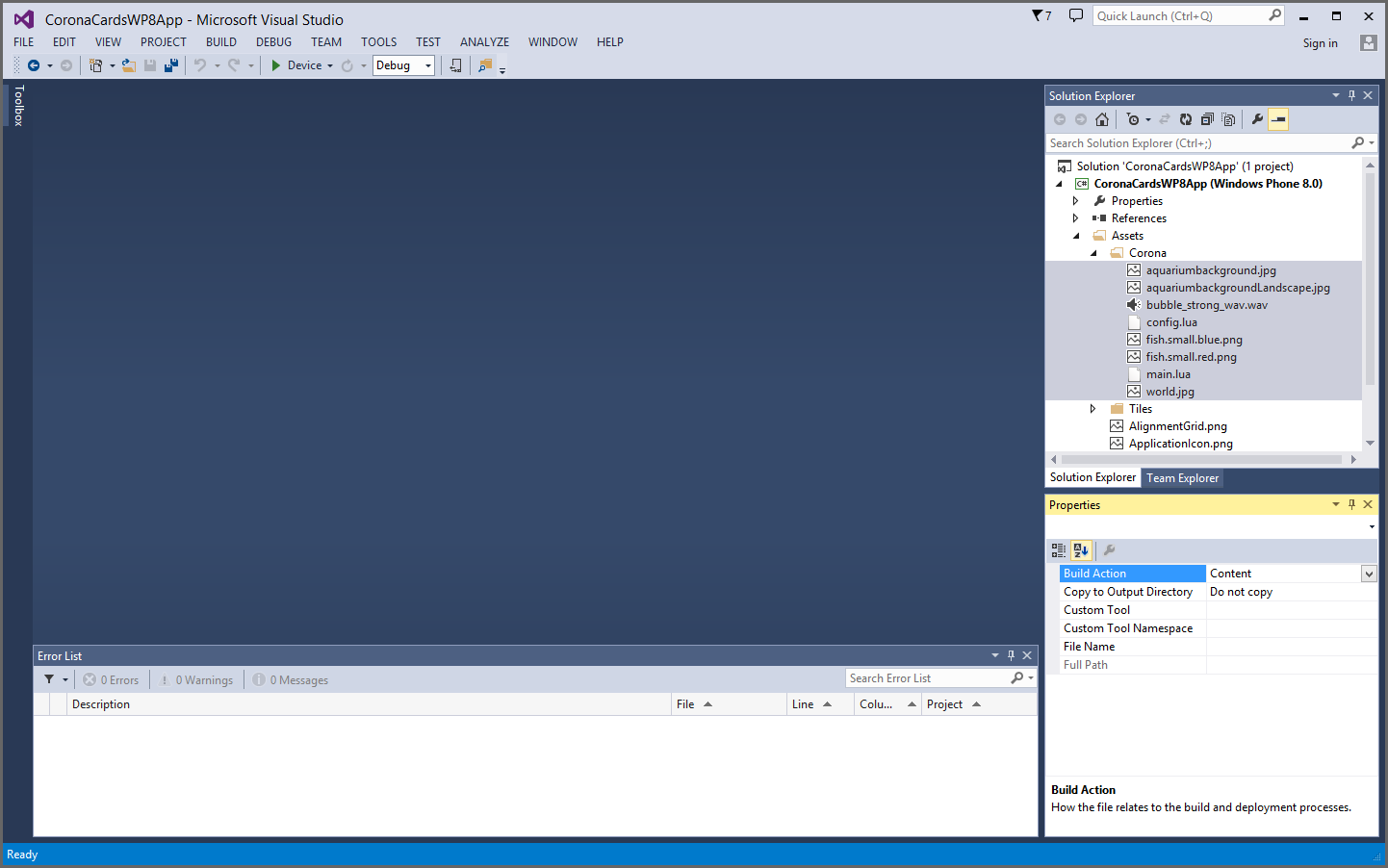 Corona icon image files such as Icon.png, Icon-hdpi.png, etc. are not supported on Windows Phone and will be ignored. Thus, you should omit these files from your Visual Studio project's Assets\Corona directory.

To include an app icon for Windows Phone, create a 100×100 pixel PNG image file named ApplicationIcon.png. When you create a new Windows Phone project in Visual Studio, a default ApplicationIcon.png will be automatically generated in the project's Assets directory. You should edit or replace this with your custom image. Unlike iOS or Android, Windows Phone does not support multiple application icon files of different resolutions — the operating system will simply scale the main icon.

Windows Phone can also display a tile for your application on the start screen. When you create a new Windows Phone project in Visual Studio, default tile images are automatically created under the project's Assets\Tiles directory. For more details on tile support, see Microsoft's documentation.

For iOS and Android projects, you typically indicate supported orientations via the build.settings file. This file is not supported on Windows Phone and will be ignored. Thus, you should omit this file from your Visual Studio project's Assets\Corona directory.

To set the orientation of a Windows Phone app, please follow these steps:

In Lua, you can check if an app is running on Windows Phone with the following code:

Windows Phone has a "back" key just like Android devices. Pressing this key will exit the app, so you are expected to override this key and implement backward navigation within your own Corona scenes before allowing the app to exit.

You can detect phone call interruption when a .NET Obscured event is raised by the operating system. However, note that this event will also be raised when a notification is received. Currently, there's no way to differentiate between these two events, but you can handle them similarly since Windows Phone notifications obstruct a large portion of the screen and games should be suspended in both cases.

To suspend an app during this event, do the following:

You can simulate phone call or notification interruption via the Windows Phone emulator. This makes it easy to test and verify that the above solution is functioning properly.

Text generation via display.newText() or display.newEmbossedText(), and text rendering within widgets, is a slow and expensive operation on Windows Phone. This performance issue is caused by the operating system's native text rendering APIs and it cannot be further optimized by Corona Labs.

One workaround for this performance issue is to use "bitmap" fonts. This involves setting up an imageSheet which contains all of the required letters/characters and then render your text via display.newImage() or display.newImageRect() objects. This will vastly improve your app's text rendering performance, since all characters will be .

The following third-party bitmap font libraries may be considered:

Note that a bitmap font library is best used for text that's under your app's control. This means that it shouldn't be used for text strings taken from a source like Facebook, Twitter, or another outside source, as this text may contain special characters which are not included in your imageSheet. In these cases, using display.newText() should be acceptable, since the text will not likely be updated/changed frequently.

Finally, regarding widgets, the performance penalty will only occur if the widget contains text, for example text inserted into tableView rows. When inserting text in this case, you should either text generated by display.newText() or use bitmap fonts.

If your Corona project includes a .ttf or .otf font file which you want to utilize via display.newText() or similar, you must use the following font naming convention — this is a standard Windows Phone XAML font naming standard which Corona uses to load embedded fonts.

For example, if you copy a Times New Roman font file named Times.ttf into your project's Assets\Corona folder, it may be displayed as follows:

In Windows, you can determine a .ttf or .otf file's font family name by double clicking on it. This will display a window which reveals the font family name in the title bar or next to the Font name: field.

Note that Windows Phone may refuse to load some font files and default to the system font instead. If the operating system refuses to load a particular font that you've provided, you'll need to use a different font file or generate a bitmap font using a bitmap font library.

CoronaCards for Windows Phone 8 does not support the audio recording feature.

CoronaCards for Windows Phone 8 does not support the store API and thus does not feature direct purchase (IAP) support. However, you can implement IAP yourself via Lua/.NET Communication — please inspect the example code here.

If your app requires other features which are not supported by CoronaCards for Windows Phone 8, you may be able to implement these features yourself in .NET. Please proceed to the Lua/.NET Communication guide for more details.