This guide discusses how to configure the various physical Box2D joints available in Corona.

Most joints are used to connect two rigid physical bodies, so you must create these bodies first and then submit them as arguments to the physics.newJoint() constructor function, along with other properties that vary depending on the joint type (see details below).

If a joint is no longer needed, you can destroy it by calling either object:removeSelf() or display.remove():

If one of the joined bodies is destroyed, the associated joint will be automatically destroyed. However, remember to properly remove and nil any references to a joint which has been destroyed.

The following properties and methods apply to all joint types:

A pivot joint, known as a revolute joint in Box2D terms, joins two bodies at an overlapping point, like two boards joined by a rotating peg. The initial arguments are bodies A and B to join, followed by the x and y coordinates for the anchor point, declared in content space coordinates. 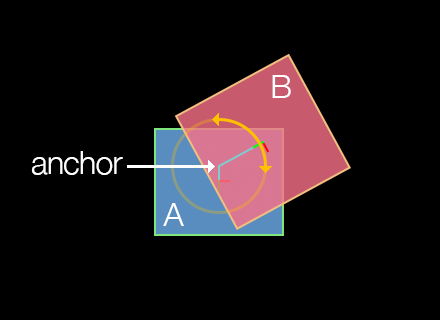 If you're building a complex assembly like a ragdoll with pivot joints and you're experiencing instability issues, consider setting physics.setContinuous() to true.

Optionally, object B joined with a pivot joint to object A can be driven (rotated) with a joint motor. This rotation can be either clockwise or depending on the motorSpeed value. Note that joint motors have a fairly weak maximum torque by default, so setting motorSpeed may appear to have little visible effect. Therefore, you should generally set maxMotorTorque to a high value such as 100000 if you're trying to move any significant mass, such as rotating a wheel to power a car.

Pivot joints can optionally be constrained in their range of rotation. For example, if constructing a ragdoll figure, the head/neck joint would likely have a limited range of angular motion in either the clockwise or direction.

A distance joint attaches two bodies at a fixed distance. The initial arguments are bodies A and B to join, followed by an x and y anchor point coordinate for each body, declared in content space coordinates. 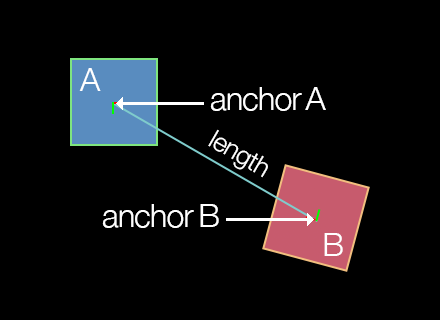 Optionally, the distance joint can be made soft, like a connection. Many factors can influence the behavior of a soft distance joint, including the mass of the attached bodies and forces upon them, so you should carefully test the specified values to achieve the desired simulation.

A piston joint, known as a prismatic joint in Box2D terms, joins two bodies along a single, restricted axis of motion, like engine pistons or an elevator platform that is restricted to movement along a vertical axis. The initial arguments are bodies A and B to join, followed by an x and y coordinate for an anchor point on either body, followed by values which define the axis along which linear motion is allowed. 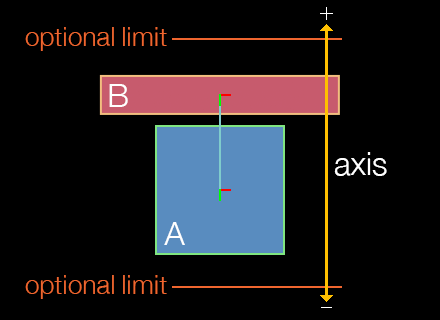 As stated, piston joints have a restricted axis of linear motion, defined by axisX and axisY. This axis can be considered a directional vector indicating which way the object will move when driven by a positive pistonJoint.motorSpeed value.

The following chart provides examples of the relationship between axisX, axisY, and a positive motor speed. However, both axisX and axisY values can be decimal values ranging between -1.0 and 1.0 — you are not restricted to these eight directions.

Optionally, the piston joint can be driven with a joint motor. Unlike the rotational motor of the pivot joint, this motion will be linear, restricted along the defined axis. For example, a piston joint motor can be used to move an elevator platform up and down along its axis.

Piston joints can optionally be constrained in their range of linear motion. The limits take the form of a lower and upper limit which define the range of motion (distance) along the axis defined by axisX and axisY.

When creating a friction joint, simulated friction can be applied via maximum force and torque values: 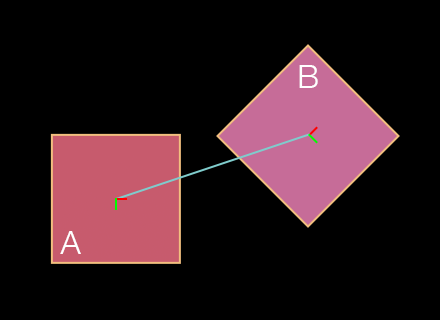 Due to mathematical approximation, this joint may appear slightly soft during simulation, even if dampingRatio and frequency are set to prevent this behavior. If you want to assemble multiple shapes without any risk of flexing, consider creating a body as illustrated in the Physics Bodies guide.

A wheel joint, known as a line joint in Box2D terms, is similar to a piston joint, except that the attached body can rotate freely like a wheel mounted to the shock absorber of a car. Most of its properties are inherited from the standard piston joint, but you can specify a frequency and damping ratio. The initial arguments are bodies A and B to join, followed by an x and y coordinate for an anchor point on either body, followed by values which define the axis along which linear motion is allowed. 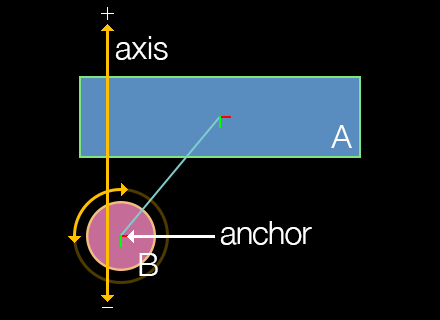 Like the piston joint, wheel joints have a restricted axis of linear motion, defined by axisX and axisY. However, unlike piston joints, wheel joints aren't driven by a motor, so you can't send the wheel moving in a specific direction based on the defined axis values. For example, setting these values to either 0,1 or 0,-1 will restrict motion to a vertical axis, but not restrict it to either upward or downward along that axis. Similarly, values of either 1,0 or -1,0 will restrict linear motion to either left or right along a horizontal axis.

Essentially, the wheel — or rather the object that represents the wheel — is prone to whatever forces might be upon it, for instance gravity. The object will attempt to stay upon the defined axis, but other forces may pull/push the wheel off of that axis in unpredictable ways.

Optionally, the wheel joint can be made soft, like a connection. Many factors can influence the behavior of a soft wheel joint, including the mass of the attached bodies and forces upon them, so you should carefully test the specified values to achieve the desired simulation.

A pulley joint attaches two bodies with an imaginary rope whose length remains constant. If one body is pulled or pushed by some force, the other body will compensate according to the simulated rope. The initial arguments are bodies A and B to join, followed by two coordinate pairs which represent the stationary anchor points from where each side of the rope hangs. The next four arguments are the x and y anchor point coordinates followed by the final ratio value which can be adjusted to simulate a block and tackle setup. 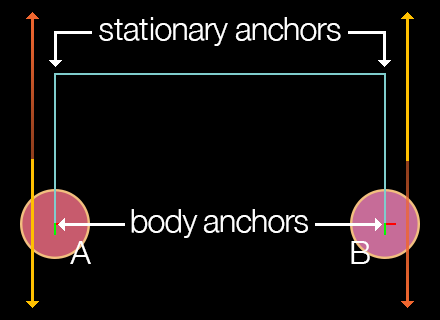 The pulley joint features a ratio property as the final parameter in the constructor. This ratio can be adjusted to simulate a block and tackle arrangement. In such a scenario, one side of the pulley rope moves faster than the other. The default ratio is 1.0 which simulates a simple pulley.

A touch joint, known as a mouse joint in Box2D, connects a single object to an target point. This can be used to move an object to a target point by a theoretical elastic joint with variable strength and elasticity. The initial arguments are the body A to connect followed by the x and y anchor point coordinates in content space. 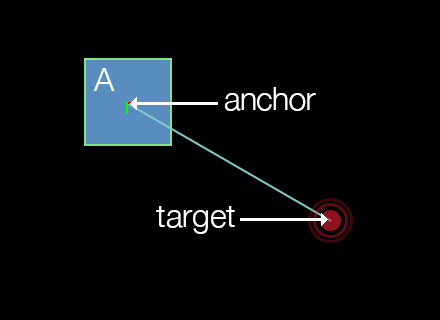 For touch joints, the anchor point can be considered the point at which to "connect" the body. For example, to connect a body by its center point, specify body.x and body.y as the last two arguments. Alternatively, to drag an object by the point it was touched on, use the event.x and event.y values returned by the touch event. This anchor point is commonly configured as a point within the bounds of the body, although it can reside outside the bounds if desired.

Note that the body connected by the touch joint remains under simulation, so it will interact fully with the other bodies in the world. Also, the body will rotate realistically under gravity when connected by a anchor point.

The target-following behavior of a touch joint is set by passing x and y coordinates to the touchJoint:setTarget() function:

A rope joint connects two objects by a theoretical rope. This restricts the maximum distance between the two bodies even if there are other significant forces upon them. The initial arguments are bodies A and B to join, followed by optional localized offset points which can be used to set anchor points for each end of the rope. 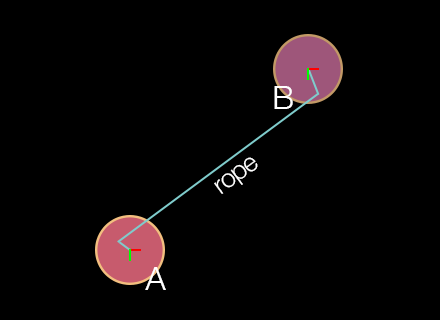 When configuring a rope joint, the offset values are optional and default to 0 unless set otherwise. Unlike other joints, these x and y values should not be specified in content space. Instead, they should be considered as localized offset values related to either body. For example, if you specify , the rope ends will be attached to the center of each body. However, if you specify , the rope end attached to body A will be offset 20 pixels left and upward of its center point, while the rope end attached to body B will be offset 10 pixels right and downward of its center point.

The maximum length of the rope can be set via the ropeJoint.maxLength property. Unlike a distance joint which can be used to keep two bodies at a fixed distance apart, the theoretical rope can bend/flex like an actual rope, but the maximum distance will always be constrained to this value.

To simulate sophisticated mechanical contraptions involving gears, consider using gear joints. This joint can link two bodies — or multiple bodies in sequence — in a setup. Then, one body can realistically power the other bodies just like a real machine. 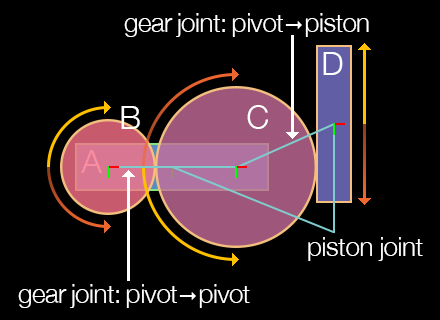 The most important distinction of the gear joint is that it operates directly upon two other joints. These two joints must be created before instantiating the gear joint, and they must be either pivot or piston joints. Once declared, one of pivot/piston joints can be powered by its motor and impact the other pivot/piston joint attached to the parent gear joint. The same principle applies to successive joints in a more complex chain configuration, assuming they are properly chained together by other gear joints.

Always destroy gear joints before destroying the associated pivot/piston joints or their bodies. Otherwise, Box2D is liable to crash due to the orphaned gear joint pointers.

Another important aspect of the gear joint is the ratio property. This indicates the ratio at which the joint drives the corresponding joint in the gear configuration. The value can be either positive or negative, depending on the direction required to create an accurate simulation.