The Composer library is the official scene (screen) creation and management system in Corona. This library provides developers with an easy way to create and transition between individual scenes.

The Composer lifecycle starts within main.lua. However, main.lua itself is not a Composer scene — it is merely used for initialization code, then it launches the first scene via composer.gotoScene(). In this call, specify the name of the scene (file) to be loaded, minus the .lua extension:

Scenes are basically just Lua files, existing as separate .lua files in your project. There is, however, some additional structural setup that you must obey so that Composer can treat them as scenes. This includes two lines to initialize the scene, four listener functions to handle the events that Composer generates, four lines of code to initialize these listener functions, and a basic return to associate the scene with Composer. Please see the sample scene template below.

The scene object itself is created by calling composer.newScene(). This object holds important data for the scene that Composer must access. For the developer, the most important aspect is the scene's self.view display group — this is the display group to which all of the scene's visual content should be added.

Once composer.gotoScene() is called, the scene's life cycle begins and it follows this basic flow: 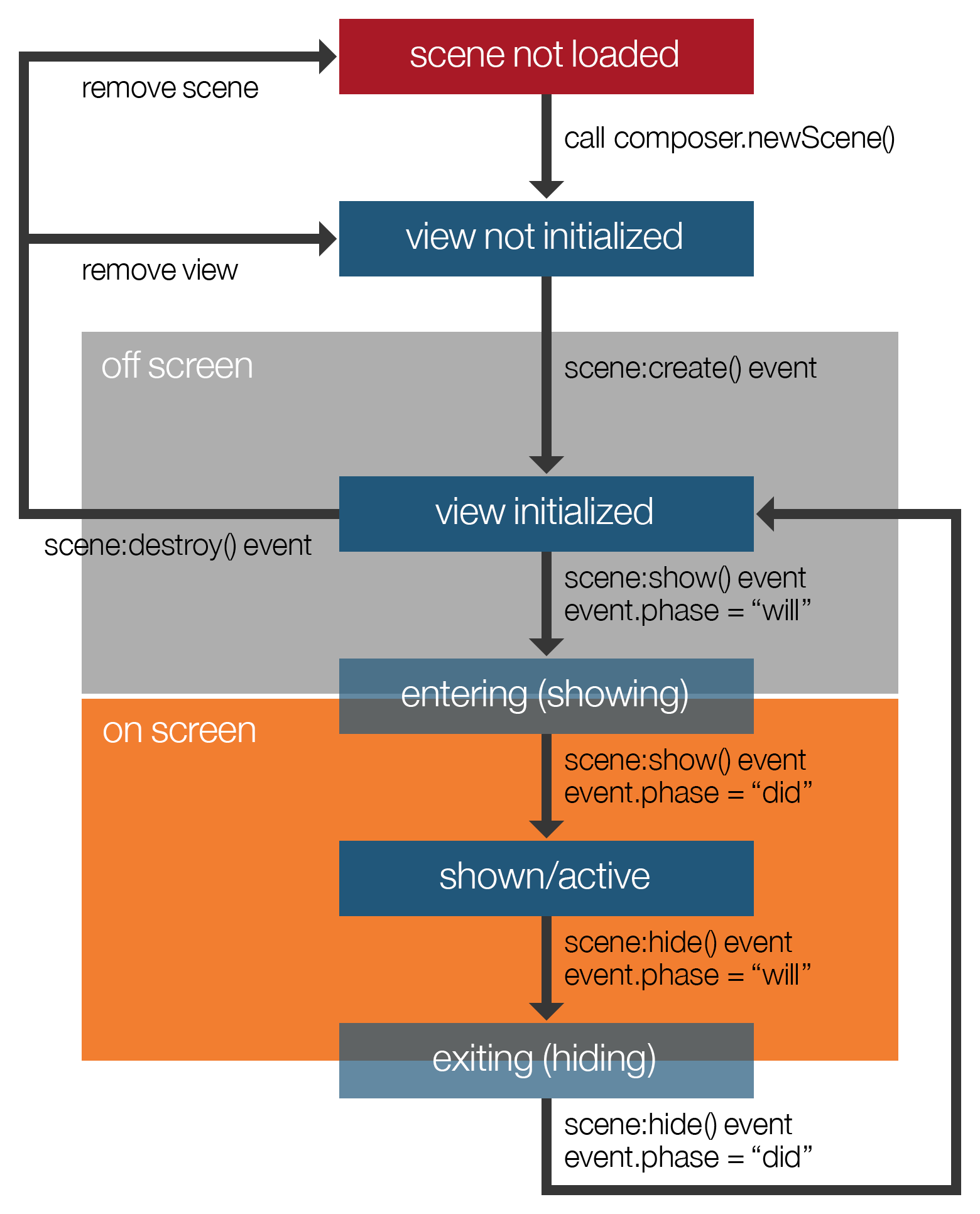 The following template can be used to create new scene files. Note that this template includes listener functions for all potential events in the scene, but you only need to include listeners for the events that you want to handle.

The first line localizes the Composer library for the scene and the next line creates the scene's view. After this, you should include any functions and local variables that will be used in the scene. Because Lua files are only loaded once, variables that you set here will not be reset when you revisit the scene unless you take explicit steps to unload the file.

After this are the four functions to handle events generated for the scene. Then, event listeners are declared to handle scene events and, finally, the scene object is returned to Composer.

Note that within the listener functions, self.view is assigned to the local variable sceneGroup for easy reference. If you need to reference the scene's view outside of these functions, just use scene.view.

Once you create scene .lua files, you need a method to access them. In Composer, this is accomplished via composer.gotoScene():

The sceneName parameter corresponds to the name of the Lua file, without the .lua extension. For example, if you have a scene file named menu.lua, access that scene with:

In addition, there are several parameters which you can optionally pass to composer.gotoScene() to control the transition as well as provide data to the scene. You can do the following:

In this example, the menu.lua scene will transition on screen using a "fade" effect over the span of 500 milliseconds. An optional table of parameters is also passed in. To access this data from the menu.lua scene, access the event.params table in the target scene's scene:create() or scene:show() function:

The following string values are supported for the effect key of the options table:

One key feature of Composer is that, for the most part, it manages display objects automatically, assuming you insert them into the scene's view group:

Upon this scene being recycled or removed, Composer will handle the proper disposal of the menuBack object, along with other objects that were inserted into the scene's view group or a child group of it. Touch, tap, and collision listeners applied to these objects will also be removed.

Just like removing display objects outside of Composer, you're still responsible for the following when you're finished with a scene:

To revert to the default behavior where scene views are retained (but hidden from view), set the property to false:

It's important to understand that neither of these conditions will unload the scene from Lua memory. To explicitly remove a scene from memory, use the composer.removeScene() call. See the next section for details.

If you're completely finished with scene(s) and don't intend to access them again, the following functions may be called:

For instance, if you want to remove both the view and the scene object for menu.lua, call:

Optionally, you can pass the value of shouldRecycle as true. This will remove the scene's view from the display hierarchy, but it will remain in Lua memory.

Even if you destroy the scene's view, certain variables will not reset. While the scene:create() will in that case, any code that was executed outside of the listener functions will not

The best practice for reloading scenes is to use an intermediate scene. In games, this is often referred to as a "cutscene" and it may show the user a summary of their performance, a menu of options like "replay" and "exit", etc. Using an intermediary cutscene, you can manually remove the scene that you want to reload, resulting in a fresh start when you load it again. However, you may still need to reset variables and reposition objects in the "will" phase of the scene:show() function.

If you want to skip the cutscene approach, you can reload a scene from itself by calling:

Composer allows you to have one overlay scene. This is a scene that gets loaded on top of the active scene (the parent scene). An overlay scene is constructed like any other Composer scene.

To show an overlay, call it via the composer.showOverlay() function. Because an overlay scene may not cover the entire screen, users may potentially interact with the parent scene underneath. To prevent this, set the isModal parameter to true in the options table. This prevents touch/tap events from passing through the overlay scene to the parent scene.

When the overlay is loaded, it behaves exactly like any other scene in regards to its event handling. That is, scene:create(), scene:show(), scene:hide() and scene:destroy() will be called with the same rules as other scenes.

To hide an overlay and return to the parent scene, use the composer.hideOverlay() call, for example:

This can be called from the overlay scene, from the parent scene, or from some event handler like an Android "back" key handler. Attempting to go to another scene via composer.gotoScene() will automatically hide the overlay as well.

Composer features a few convenience methods and properties to assist with your scene management.

You may store key-value pairs internally within the Composer module which should assist with accessing data between scenes. To set a variable that may be accessed from another Composer scene, use the composer.setVariable() function, for example:

Then, to retrieve a variable from another scene:

Getting a Scene Name

To get the name of a scene, use the composer.getSceneName() function and pass in one of the following string values as the sole required parameter:

The composer.stage property returns a reference to the Composer display group which all scene views are inserted into. This can be considered as the "Composer scene layer" and it's useful if you need to place display objects above or below all Composer scenes, even during transition effects. For example:

The composer.isDebug property toggles "Composer Debug Mode" which, if set to true, prints useful debugging information to the Corona Simulator Console in certain situations. This should be set to false (default) before building the project for deployment.